LG Optimus G Pro user here (LG-F240S). I recently rooted my phone, then used Gomdol's tool, which roots the phone and installs CWM recovery at the same time. I had initially thought that the application also unlocks the bootloader, but since then found out it doesn't.

Anyways, the first time rebooted into recovery, I flashed a ROM (specifically for F240S), which wasn't successful for some reason. Now, when I boot up the phone, it keeps saying "Secure Booting Error! Cause: boot certification verify"

I have tried everything, from the Volume down + Power + Home to erase everything and do the factory reset, but it doesn't work. I have also downloaded the stock firmware, and tried the KDZ_FW_UPD application to flash the stock firmware, which also did not work (Extract File Error). My last resort was using LGMobile Support Tool, but it keeps telling me to recharge my battery (my batter is currently recharged to 100%, and the USB is plugged in, so something is very wrong here) 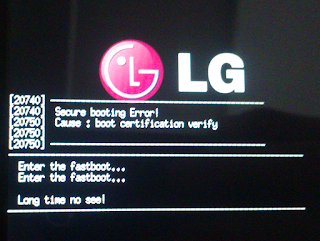